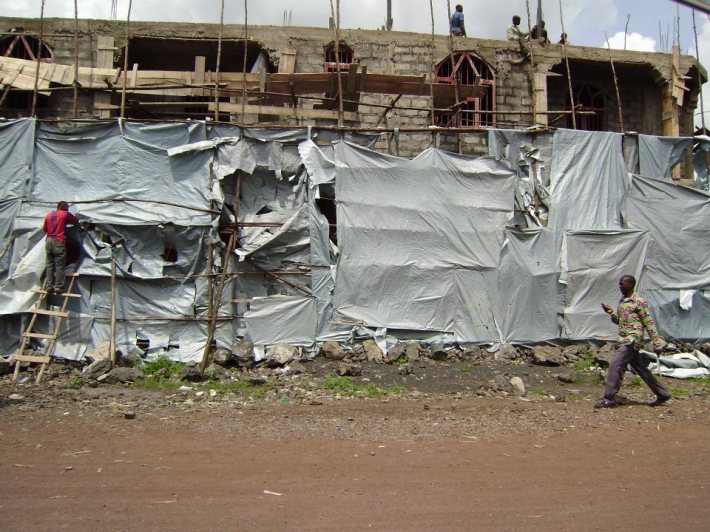 Everywhere heaps of debris, refuse, and offal; standing pools for gutters, and a stench which alone would make it impossible for a human being in any degree civilised to live in such a district.

Frederich Engels, The Condition of the Working Class in England (1892)

The hell of reproach that is Goma.

Rural poverty in Africa is the poverty of saints; urban poverty is grubby, demanding and uncomfortable. Goma is written exclusively as passive, victimised, or as a bystander to violence. It’s the setting, but only the setting, for great events: the camps of 1994 have been designated as the historical point at which the world first encountered Rwanda’s genocide. Its name represents the images and narratives that dominate writing on the Congo wars – rape, profit and endless acronyms. If the town itself gets a look-in, the language is Engels’; filth and hopelessness, or amoral ostentation.

In a suburb near the centre of town a building is half-standing with interior intact. A local man made his money in mining and built a three-storey house that protruded by a few feet into the dust of the road; the city authorities intervened and tore off the front of his home. He’s building a replacement a few feet further back. The construction crew is thirty or forty men scrambling on rubble, throwing half-bricks to each other, climbing spindly timber scaffolding. Elsewhere UN food sacks are used to cover doors, and rubble from 2002’s lava flow has been broken up to rebuild homes destroyed by the volcano or by fighting. Roads lose their way into congested market areas. Household waste is neatly piled outside the house and set alight at the end of the day, so that at night the street is marked by a line of tiny burning mounds and the air is filled with rank smoke.

Greg Hilditch is an independent researcher focusing on urban identities in late colonial and early independence-era Africa. Earlier this year he spent two months in the Democratic Republic of Congo as part of a broader project aimed at compiling an oral history of the 1964 CNL / Simba rebellion.