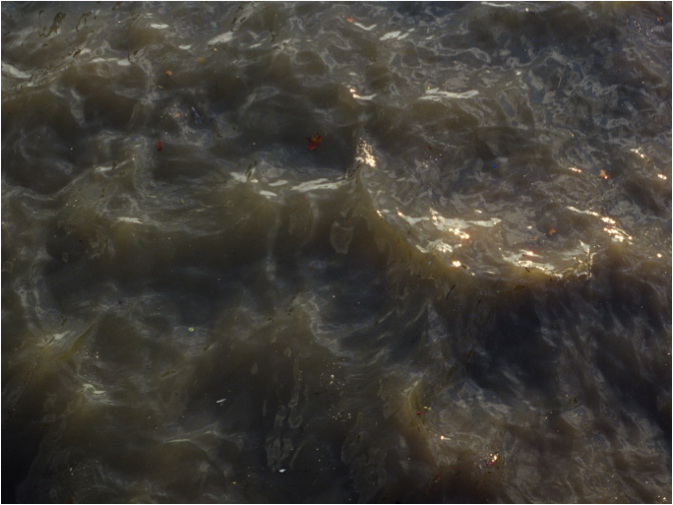 This autumn I ghost wrote my own autobiography through the lens of Walter Benjamin’s Arcades Project. The result was not a text but an exhaustive and immutable archive of four surfaces. Above is the digital version of that collection. The surfaces’ significant details and properties are indexed below. 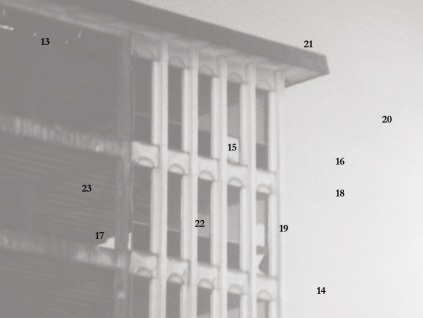 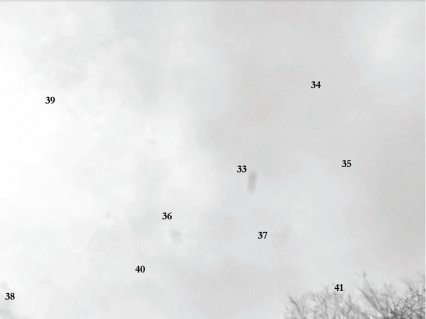 2 The city’s most significant colours: grey;

4 And fleeting scraps of brilliance, mostly drunk or high.

5 “She literally felt, in this first flush, that her only company must be the human race at large, present all round her, but inspiringly impersonal, and that her only field must be, then and there, the grey immensity of London.” _Henry James, The Wings of the Dove. An appropriate ‘London’ quotation.

6 One might begin to understand how relationality lies both before and after the subject, identity, the social, architectural, etc. – in other words, begin to think relationality as something other than grounding or transcendence _John Paul Ricco _The Logic of the Lure.

7 The field of water ebbs and glimmers. Her only “field”? [topography]

8 Roni Horn, Still Water, The River Thames, 1999. Comprising fifteen lithographs of the surface of the River Thames – sculptural, frozen-in-time images, with numbered annotation scattered throughout the pictorial plane and corresponding to textual notes running along the lower border of each piece. The notes include personal reflections and ephemera gleaned from literature and news stories, often describing suicide deaths on the river. 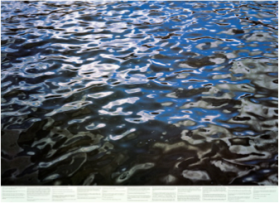 9 “The Thames has the highest rate of suicides of any urban river. Maybe it’s not the highest but it’s close. It doesn’t really matter because even if it doesn’t, it looks like it does.” _Roni Horn, Still Water.

10 There need not be bodies below this surface to look like there is. On the surface “No evidence was found that suggested foul play or suicide” _Wikipedia, “Montgomery Clift”. Death July 22, 1966 in New York townhouse.

11 Might one “propose an ontology of universal immanence: the surfaces of all things ‘quiver’ from the presence within them of all the other things to which they relate … there is indeed another world but it is this world envisioned as a vast reservoir of correspondences, of surfaces always ready to ‘open’ in order acknowledge, to welcome, to receive that which is at once their outer and their immanent being.” _Leo Bersani, Forms of Being.

12 “Whatever I was thinking of at the time, what the river provoked in me, and what was in the river itself.”_Roni Horn.

14 “It was the kind of scene that may be observed all over London, whatever locality – bricks and mortar rising and falling with the restlessness of the water in a fountain [water], as the city receives more and more men upon her soil. Camelia Road would soon stand out like a fortress, and command, for a little, an extensive view. Only for a little. Plans were out for the erection of flats in Magnolia Road also. And again, a few years, and all the flats in either road might be pulled down, and new buildings, of a vastness at present unimaginable, might arise where they had fallen.” _E.M. Forster, Howards End.

15 “A local activist’s efforts to preserve the downtown Education Centre are waning as the clock on the landmark building ticks down. / McMaster University, which purchased the building from the public school board in March, is scheduled to drop the wrecking ball on the Education Centre in late August. It takes possession of the building from the public school board earlier that month.” _Hamilton Spectator, July 19, 2012. 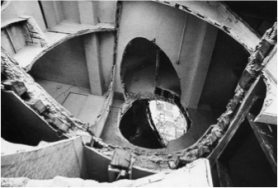 17 “[Yves] Klein worked on the project, which grew to include urban design and social renewal, in collaboration with architects. He planned to construct the immaterial “city of tomorrow” from the three classical element: fire, air and water, and took out patent applications for inventions such as an ‘Air Roof’, ‘Fire and Water Wall Bungalow’ and a ‘Sheltered City’.” _Ralph Rugoff, Invisible: Art and the Unseen. [modernity]

19 Why are men the actors and woman the characters in these notes? [relationality]

20 Howards End is a book that is, in part, Forster’s assessment of twentieth century modernity. His anxiety regarding the era’s economic and social change is often conveyed through the trope of London’s urban expansion into the English countryside and the construction boom within its borders that brought about Edwardian mansion block architecture and the conversion of townhouses into suites of flats. Forster evokes the ubiquity of the “flat phenomenon” in London, which changes the demographic and architectural topography of even the most fashionable and old-fashioned parts of town. [history]

21 “A flat in Hamilton” _Google Image search, first result. “HMCS Ojibwa has been loaded onto a flat barge in Hamilton, Ontario. This will permit the least amount of draft required for entry into the harbour at Port Burwell.”

22 Instead of apartment blocks, mainly we anticipate parking lots. ImPark, “50 Years in Parking.”

23 The process of archiving evidence, of gathering information together for an archive, Derrida suggests, is associated with “the function of unification, of identification, of classification.” This process, he adds, “must be paired with … the power of consignation.” For Derrida, consignation refers to two related processes: one is the “act of consigning through gathering together signs” and the other is the objective “to coordinate a single corpus, in a system or a synchrony in which all elements articulate the unity of the ideal configuration.” Thus, while the archive does not, and cannot, house a complete past, its consignation creates the illusion of being whole, an illusion that the archive fails to acknowledge. _Brent Harris _The Past, the TRC and the Archive as Depository of Memory.

25 A close up glamour shot, too close and digitally degraded. “[I]nspiringly impersonal” _James.

26 “The minute Monty came on the screen I cried because he was so realistic and honest and I was deeply touched. He seems to be creating a new kind of acting – almost documentary in approach. It has the style of reportage.” _Richard Avedon on seeing him in The Search. In Patricia Bosworth, Montgomery Clift. [the Real]

27 Imagine for a moment some vast and fiendish fellow taking up some loose threads and gently pulling, just so, so that all the buildings and things about would loosen slightly, becoming flatter and smoother and less defined, like an old, soft-focus close up. [architecture]

28 Here, with the shadow at the corner of the mouth, we get a sense of the topographical nature of desire: slantwise, straight, bent.

29 Homosexuality is “not a form of desire but something desirable … Therefore, we have to work at becoming homosexuals. Homosexuality is a historic occasion to reopen affective and relational vitalities not so much through the intrinsic qualities of the homosexual but because the ‘slantwise’ position of the latter, as it were, the diagonal lines [architecture] he can lay out in the social fabric allow these virtualities to come to light.” _ Michel Foucault, Friendship as a Way of Life (interview).

30 To open, acknowledge, to welcome and to receive as a mouth does. [Desire]

31 “It came to be known, inaccurately, as the Method. After Clift came Brando, and after Brando, James Dean. Clift was the purest, the least mannered of these actors, perhaps the most sensitive, certainly the most poetic. He was also remarkably beautiful.” _Peter Bogdonavich, Who the Hell’s In It.

32 “He was banged up. His face was almost a different face. He was also very shaky and on liquor and drugs, just quivering with doubt. It was a tough, tough thing to deal with. He was also unmasculine, which hurt the love story.” _Jeff Young, The Master Director Discusses His Films.

34 This isn’t what we’re supposed to see.

35 A smear (a rain?) on the surface of the lens. “Having defined in outline everyday life as a level (of social reality) we can consider individuals’ and groups’ situation in relation to this level. Conversely, it allows us to clarify the ideas of level and of everyday, as a level of reality.” _Henri Lefebvre, Clearing Ground, 1961. [topography]

36 “Only someone who has grown up in the big city can appreciate its rainy weather, which altogether slyly sets one dreaming back to early childhood. Rain makes everything more hidden, makes days not only gray but uniform.” _Walter Benjamin, The Arcades Project. The gray inspiringly impersonal immensity of London – to recall James.

37 Lefebvre sees the everyday as the system of orchestral ‘noise’ that is the necessary context of any particular musical thread one listener might pull at. Lefebvre calls it a level. It is a grounding, a base, a solvent… (but perhaps here, at solvent, we’ve gone too far already as it implies a disillusion of the dialectical, topological metaphor that Lefebvre prefers). “It is everyday life which measures and embodies the changes which take place ‘somewhere else’, in the ‘higher realms’.” Meaning occurs for Lefebvre, not as transcendence of the plane of the everyday but as a high ebb or glint upon the surface of water, at once distinct and inseparable from the context around it.

38 “Surfaces blurred, made somewhat indeterminate by the light shining on them, are visual metaphors for the indeterminate identity conferred on all things by inaccurate replication. The ungraspable nature of reflected being is also emphasised by the importance of water…”_Bersani.

39 Method acting is often contrasted with so called “surface acting,” whereby the Method denotes not so much the absence of surface or countenance – but one that seems perpetually to quiver with the threat of its giving way to something below.

40 Recall the surface of the Thames. [water]

41  “Uninhabitable parts of this of this surface, the sea and the deserts, separate this community, but in such a way that the ship or the camel (the ship of the desert) makes it possible to come into contact with one another across these regions that belong to no one, and to use the right to the surface, which is common to the human species, to establish commerce with one another.” _Immanuel Kant, Toward Perpetual Peace. [desire]