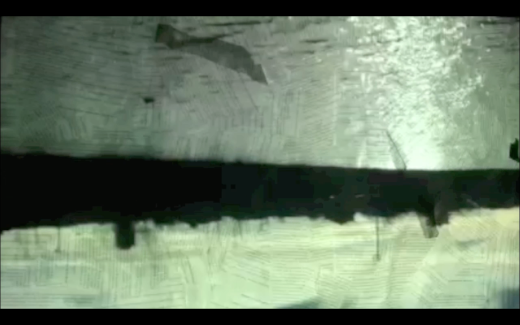 There’s a place I like to visit when ordinariness becomes overwhelming (more so than usual). It’s a concave, open space—a counterpoint to the stubby cylinder, a “coliseum,” that I can’t miss when I look through my window. It’s a place where reflections vanish as the horizon appears. It possesses a texture dissimilar to the flatness of the ceiling of my apartment, which lazily renders the gaudy aesthetics of the neon billboard nearby. It accumulates fissures, ruptures, and imperfections, none of which it quite knows how to negotiate. It’s a fragile place I hold on to.
On August 2nd, 2012, cyanobacteria were detected around Hamilton’s shores, encouraging the municipal authorities to impose restrictions on swimming and nautical sports in order to reduce the population’s contact with “toxins and skin irritants.” By the end of September, the proliferation of blue-green algae in what has been called “an internationally recognized pollution hot spot” began to be described as a “drinking water threat.” A committee tasked by the province to evaluate the purity of water resources raised concerns regarding possible contamination at the tip of the city’s intake pipe, located five kilometers east of the shipping canal, a mere 945 meters into Lake Ontario.

I’m anxious…
In Ugly Feelings, Sianne Ngai affirms that the temporality of anxiety, its future-orientedness, makes it belong to Ernst Bloch’s category of “expectant emotions,” meaning that it is “guided less by a goal than by the fetish of configuring the world and, by extension, the future disposition of the self.” Ngai recuperates Heidegger’s notion of falling, arguing that anxiety, contrary to the widespread understanding of this phenomenon as something limited to inner states of mind, possesses an outward-bound directionality. Anxiety, hence, designates Dasein’s confusion regarding the magnitude of his throwness into the everyday world. Anxiety, for Heidegger, is redemptive: Dasein’s inability to estimate the extent of his falling into inauthenticity constitutes a possibility for authenticity or subject formation.

…but the Hamilton harbour, too, is anxious.
The Hamilton harbour, whose existence occurs under the condition of toxicity, cannot project itself into the future as a viable ecosystem due to the instability of its toxic present. The trope “anxious harbour,” or “anxious ecosystem”, which considers the anxiety of matter at large, human and nonhuman alike, turns Heidegger against himself. Stripped of its humanist envelope, anxiety refers to disrupted vectors of ontological projection sensed in time and space. Anxiety, when it penetrates the realm of visuality, rhymes with unsteady images that are always slightly out of focus, always slightly out of frame. Such images seek stability, unaware of the exact throw distance that would allow them to reach an otherwise irregular screen.

We’re both sick.
As anxiety circulates from the social to the biological, toxicity transcends the biological and extends into the social, where it possesses “affective ties to vulnerability and repulsion,” as Mel Y. Chen propounds. This second movement should be less arduous to conceptualize, considering a reliance, from organizational jargon to talk-show culture, on metaphors such as “toxic environments” and “toxic relationships.”

I made it sick. Now, it makes me sick.
Contaminator/contaminated is a dichotomy that toxicity ignores. While toxicity can be channeled to function as a biopolitical apparatus, the containment of a contaminating device is never absolute. Once it is toxic, an entity is always in excess of itself; it already possesses the power to infect or intoxicate in return. Toxicity is not invested in legal definitions of responsibility; it does not distinguish between two bodies or environments on the basis of which one became toxic first and why that happened. Toxicity articulates its own lateral temporality, one that, although less clumsily produced than the temporality of anxiety, shares its proclivity for fragmented logics of agency.

But it doesn’t matter: we’re both sick.
Material/immaterial is another binary that toxicity disobeys. One may argue that the toxicity of the media discourse on blue-green algae is essentially immaterial and that of the algae mostly material. But how do we account for media speculation when it triggers forms of stress and anxiety which, once embodied, manifest themselves as health impediments? Similarly, while the toxicity of Lake Ontario is ultimately tangible, it remains abstract as long as its contact with human and nonhuman organisms remains a threat or a potentiality. Toxicity functions along an axis of affection, and, as Eve Kosofsky Sedgwick posits, affects can attach themselves to “things, people, ideas, sensations, relations, activities, ambitions, institutions, and any number of other things, including other affects.”

I hold on to this fragile place because the toxic, or the intoxicating, is not only poisonous; it can act as a powerful sedative as well.
In a close reading of Gregg Bordowitz’s film Habit, Lauren Berlant writes, “[Everyone] lives the present intensely, from within a sense that their time, this time, is crisis time.” Living in crisis compresses all temporalities into a hyperreal present—a present both hyper-felt and beyond itself. If anxiety and toxicity fuse past, present, and future and render them as flux, crisis turns this awkward temporal configuration into a totalizing feature of sensory experience in the present. Crisis is about feeling everything at once. Which, of course, often ends up feeling like nothing at all.