Urbs #1 is a walking tour of

Urbs #1 begins at a border that is no more, steps through an obsolete portal, and continues across the water to walk alongside gone workers and send unbeknownst soulmates off sailing. originally given to a friend some three years ago on the occasion of their birthday, urbs #1 is a concretely walkable non-topography, and the writing that follows was — is — likewise a meditation on concretely being — and being with — whatever does not necessarily appear, but which is necessarily right here. 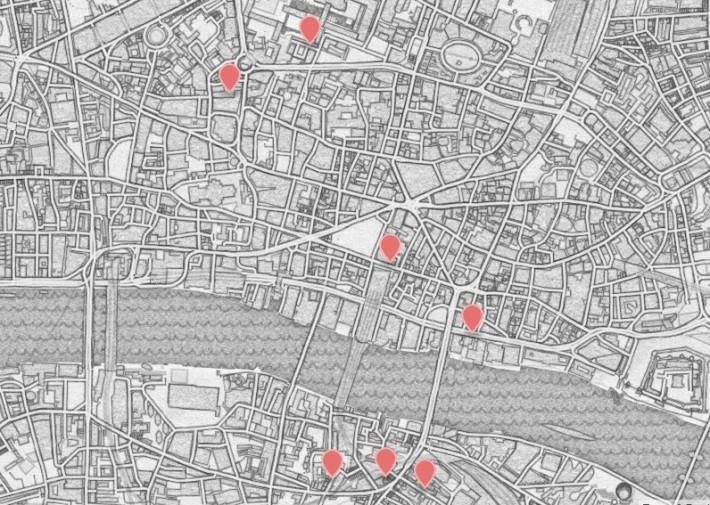 //on the southern side of the church is an ort of city wall constructed by industrious peoples once conquerors in these parts. these conquerors scarpered four hundred and ten years after a son of a god was born. with our necks bent over the ditch, our trunks squeezed between sacred stones and secular bricks, we meet and begin our walk into the city that is not where it is — a city of redundant portals; of lives lived here but forbidden to die here; a city into which other cities have sailed and from which we, too, will today take sail.

//we are now in cripplegate. this was cripplegate, an entrance, a starting point destroyed two centuries ago and sold to a carpenter for 91 quid. on the stones of its destruction we break open our eyeballs and walk into the city that is not where it is.

//we make our way first of all to gather lost friends, vacant souls to accompany us on our journeys.

//our toes two feet above ground level, we stand in what was once a working graveyard, but which is now no more — no more than a park. until the storm of cholera blasted through these parts and piled the bodies up so high that it was impossible to cut out a grave without cutting out another, this turf was all punctured with gravestones. today the remaining stones lean up against the walls. in 1851, parliament issued an act forbidding any more bodies to come to rest here. the graveyards were closed, to be turned into parks. people were invited to come and pick out and up the stones of their loved ones — and it is that act of retrieval that it is today our task to imitate. so go, take a card, and record on its rectangle the soul of an unknown friend, a soulmate you never knew you had, someone to accompany you into the city that is not where it is.

activity: from amongst the gravestones find a soul to accompany you into the city that is not where it is; write down their name, date of birth, date of death, and any extra information about them on the index card we will now give you.

//what is the london stone?

origin: does not occur of its own accord in these environs; nearest source: kent.

significance: marks the central spot, the place from whence all measurements are made, the place where oaths were sworn and proclamations of the city made. coke cans and tissues and fag ends now ornament it.

activity: explore all sides of the church: south, north, east, west; inside and out. what do you notice about the north that is different to the south? answer: you might note that we are now near bilingsgate, where fishes once were farmed and sold and beaten around the faces of “gossiping women.” well, the windows of this building were blocked to prevent the fish from singing.

//this is crossbones, 18-22 redcross way, the home of those fucked in many manners of the word. from 1161, prostitutes in the area were licensed by the bishop of winchester, whose palace was nearby; they became known as “the winchester geese,” but were not allowed to be buried in consecrated land.

//for years no one knew it was here — until in the 1990s they broke the ground when building the jubilee line, and the bodies were found. 148 skeletons were dusted off and recovered, an estimated 1% of the total burials here. most were women; over one third were perinatal (between 22 weeks gestation and seven days after birth); many others were under one year old. between the 1840s and 1990s no one knew this was here. the workers broke the ground when constructing the jubilee line, and then, they found the bodies.

//London’s tudor historian, John Stow, said: “I have heard of ancient men, of good credit, report that these single women were forbidden the rites of the church, so long as they continued that sinful life, and were excluded from Christian burial, if they were not reconciled before their death. and therefore there was a plot of ground called the Single Woman’s churchyard, appointed for them far from the parish church.”

activity: eat what you will at maria moruzzi’s market cafe.

//next we take our souls to the “old operating theatre,” located in the roof space of an english baroque church. £6 entrance fee.

activity: inside the operating theatre, memorise as many objects as you possibly can

post-theatrum activity: using this old A-Z from the 1930s, lead us to the bandstand in southwark park.

activity: find the first public memorial to a working class man; drink and be merry in the bandstand

activity: release your papery soul into the water